The new French law that includes a mandate for green roofs and solar roofs has finally been passed. The French Biodiversity Law went through on August 8th, although the Guardian originally suggested it had become law back in 2015.

But what does the law actually say? And more to the point, what do we think will be its impact in the long term?

Livingroofs.org’s French colleagues have translated the green roof and renewable energy statement in the law for us.

(AN2) I. – Article L. 111-19 of the Urban Development Code is also supplemented by three paragraphs as follows:

“For projects mentioned in Article L 752-1 of the Commercial Code, the construction of new buildings will only be authorised if they include:

“On all OR a part of their roofs, and not exclusively, EITHER renewable energy generation systems OR a greening system ensuring a high level of thermal efficiency and insulation and promoting the preservation and restoration of biodiversity OR other systems that will have the same result.” 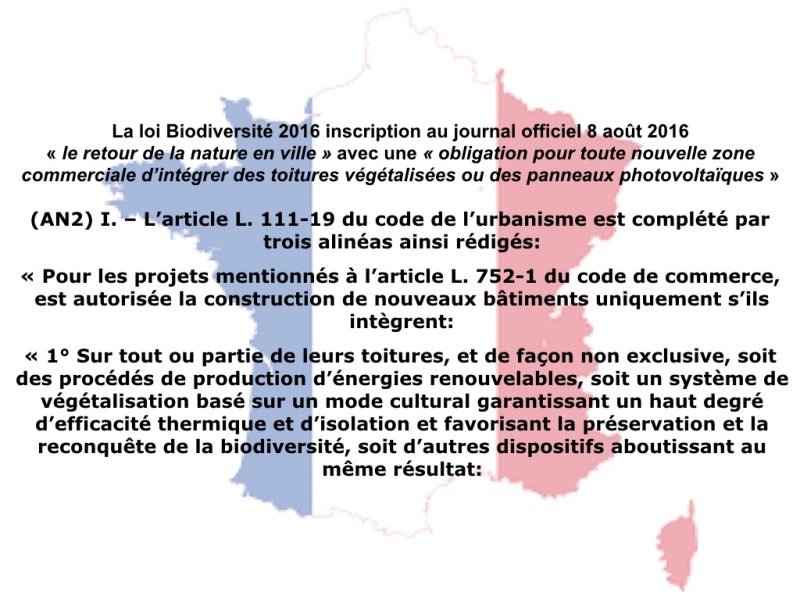 The statement contains a lot of EITHER/ORs. Whilst it may seem positive that finally a national government has taken the ambitious step to create a national law that includes green roofs, will this lead to an increase in uptake? A colleague who often works in France commented:

Livingroofs.org has already written that, given an option of solar OR green roofs, a developer might be more likely to choose solar. In the light of this, people in the green roof movement might want to review their enthusiasm for this law. The original draft law put before the French Senate proposed solar AND green roofs. This would have removed the choice between technologies and promoted biosolar roofs that deliver for biodiversity AND renewable energy generation.

Solar and green roofs combined are the future

Here at Livingroofs.org, we are all for the use of solar panels at roof level. However, we believe that the future lies in combining both technologies, to create biosolar roofs. Forward-thinking developers may well consider both. Nonetheless, until it becomes policy of some sort, the majority probably will not.

As the new Law only comes into effect in March 2017, we are unlikely to see the impact for several years. Livingroofs.org will be eagerly watching the roofs of France to see what happens next.